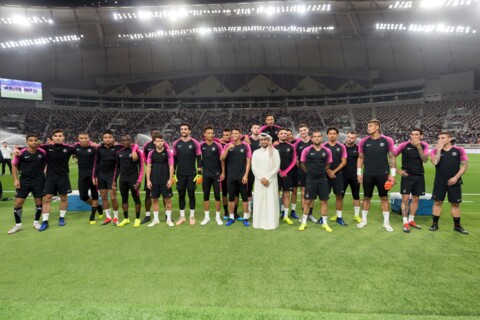 Photo Caption: Players Neymar Jr, Angel Di Maria, Gianluigi Buffon and Thiago Silva, partake in a particularly special training session in the Inland Sea, one of the few places in the world where dunes meet the sea. The players’ curated experiences will be the subject of a promotional feature film that will air soon and bring destination Qatar to life to millions of viewers and football fans around the world.

The shots were taken during the Qatar Winter Tour 2019, which gave the players a chance to enjoy the refreshing winter sun, exciting activities and an open training session in one of the FIFA World Cup 2022 venues, Khalifa International Stadium.

Rashed Al Qurese, Chief Marketing and Promotion Officer at Qatar National Tourism Council commented, ““We were delighted to host Paris Saint-Germain’s football stars during this week’s winter tour. The strategic partnership we enjoy with Paris Saint-Germain plays an important role in our efforts to shine a spotlight on Qatar’s sports and leisure tourism offering, and to amplify our message of welcoming the world.”

He added, “Qatar continues to witness developments in its infrastructure and sports facilities, making it a preferred destination for some of the world’s leading sports clubs and federations to host training camps and enhance their performance. It’s always a pleasure to welcome Paris Saint-Germain back, allowing them to benefit from Qatar’s facilities, and giving their fans a treat. We hope sport lovers around the world will enjoy the promotion film we shot with some of the team’s players this week.”

Jean-Martial Ribes, Communications Director at Paris Saint-Germain added, “The Qatar Tour 2019 has been a success on every level. The training conditions at the Aspire Zone were ideal as always and greatly appreciated by both players and staff. Overall the tour has helped with team-bonding and motivation, while the open training session was a huge success at Khalifa International Stadium, with over 15,000 local fans attending as well as media and VIPs. The now famous Paris Saint-Germain Camel Race was the highlight of the tour with huge pick-up in the international press and social media all over the world.”

He continued, “As our CEO and Chairman Nasser Al-Khelaifi had wanted, the Paris Saint-Germain players’ visit has put Qatar firmly in the global media spotlight, thanks to over 60 one to one player interviews with press from all over the world. The tour has so far generated over 2,500 articles in 85 countries and nearly 20,000 social media posts, and we were very pleased with all the numerous promotional activities done during our stay."

The NTC’s work is guided by the Qatar National Tourism Sector Strategy (QNTSS), which seeks to diversify the country’s tourism offering and increase the sector’s contribution to Qatar’s economy by 2030. In 2017, the Next Chapter of QNTSS was launched, charting the next five years (2018-2023) of the tourism sector’s growth.

Since launching QNTSS, Qatar has welcomed over 10 million visitors. The economic impact of the tourism sector in Qatar is becoming increasingly visible with 2016 estimates showing a total (direct and indirect) contribution to Qatar’s GDP of 6.7%.