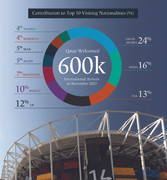 Hosted in Qatar, the Middle East’s first FIFA World Cup™ has seen cheering fans travel across the globe to support their favourite teams, while visiting the world-class tourism attractions on offer in the capital and across the country. Early November, and less than two weeks into the global sporting event, Qatar Tourism (QT) reports that the country had already welcomed over 600,000 visitors from around the world.

As the first-ever Middle Eastern nation to host the FIFA World Cup™, Qatar’s historic achievement for the region has been followed by further wins and records relating to the tournament. Up to the opening day on November 20, a FIFA spokesperson revealed that 2.95 million tickets had been sold, comfortably exceeding Russia (2018) where just over 2.4 million tickets were sold. Later, the Argentina-Mexico match in Lusail Stadium saw the highest attendance in record at a FIFA World Cup™ match since 1994, with 88,966 attendees. Outside the stadiums, the mega-tournament has drawn in record-breaking numbers in TV viewership, across multiple markets.

Between matches, international visitors can take inspiration from Qatar Tourism’s latest campaign, “No Football. No Worries.” fronted by the legendary Italian footballer, Andrea Pirlo by heading to the attractions featured in the series of humorous advertisements. From the bustling streets of Souq Waqif to the stunning collections available at the Museum of Islamic Art, fans can follow Pirlo and enjoy a range of adventures in the heart of Doha.

At the same time, visitors can take part in the recently launched joint social media competition by QT and the Supreme Committee for Delivery & Legacy, for a chance to win a $100,000 prize (Terms and Conditions apply). Fans can snap and post their photos using the @VisitQatar handle and #UltimateQatarExperience hashtag, to win lucrative travel packages.