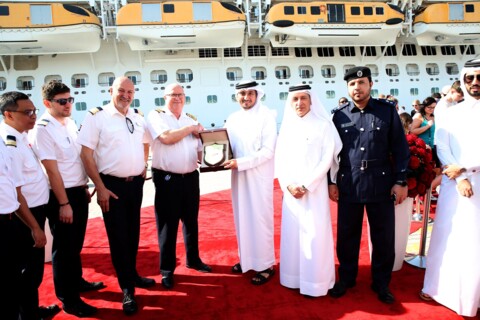 The Jewel of the Seas, a mega ship operated by US-based cruise liner Royal Caribbean International, made its maiden call to Doha Port on Wednesday, 25 December 2019. The Radiance Class cruise ship is scheduled to make a total of five calls to Doha Port throughout the 2019-20 cruise season.

To welcome the ship, officials including H.E. Mr. Akbar Al Baker, Secretary General of QNTC and GCEO of Qatar Airways among others, were present. A crest exchange ceremony took place between Qatari Officials and the ship’s captain Anders Bjornar Ingebrigtsen, upholding a maritime tradition that celebrates maiden voyages to a new port.

H.E. Mr. Akbar Al Baker, Secretary General of QNTC and GCEO of Qatar Airways, said, “The arrival of our first American mega cruise ship marks the beginning of a new chapter in Qatar’s cruise tourism, and positions Qatar as an attractive tourist destination for visitors from around the globe. The extraordinary growth in Qatar’s cruise sector, as evidenced by the number of cruise ships and passengers to Doha Port, is the result of close collaboration between key stakeholders representing Qatar’s tourism and aviation industries, immigration, customs and the Ports Authority, who have all worked together to create a seamless visitor experience.”

Jewel of the Seas first set sail in the spring of 2004 as Royal Caribbean’s fourth Radiance Class ship and comes in at 90,090 gross tons with a total capacity of 3,292 visitors. The ship offers a new level of luxury and entertainment with 12 passenger decks, a poolside movie screen, rock-climbing wall, running track, mini-golf course, spa and fitness centre, shopping, restaurants, and live Broadway-style entertainment shows.

The 2019/20 cruise season that kicked off on 22 October with the launch of Doha Port’s temporary terminal, is set to be the biggest yet for Qatar, due to bring a total of 248,123 passengers aboard 74 ships, showing a growth of 121% and 66% respectively, over the previous season.

Among the 74 confirmed calls this season, there are 16 turnaround calls and 9 overnight stays in Doha Port. This will give cruise visitors ample time to explore the destination’s travel, hospitality and retail promotions during the winter season, as well as a host of exciting events to choose from such as the ongoing FIFA Club World Cup 2019, the upcoming Shop Qatar festival in January, Doha Jewelry & Watches Exhibition in February and Qatar International Food Festival in March.

QNTC’s work is guided by the Qatar National Tourism Sector Strategy (QNTSS), which seeks to diversify the country’s tourism offering and increase the sector’s contribution to Qatar’s economy by 2030. In 2017, the Next Chapter of QNTSS was launched, charting the next five years (2018-2023) of the tourism sector’s growth.

In 2018, QNTC launched a global destination campaign under the tagline 'Qatar, Qurated for you.' Curating requires professional or expert knowledge to select, organise and present unique experiences. As such, the Qurated campaign plays on the word's definition and the destination brand's iconic Q to underscore the country's focus on delivering tailored visitor-centric experiences.

Since launching QNTSS, Qatar has welcomed over 12 million visitors. The economic impact of the tourism sector in Qatar is becoming increasingly visible with 2017 estimates showing a total (direct and indirect) contribution to Qatar’s GDP of 6.6%.